This morning as I rummaged through various bags of samples and small quantities of aged puerh searching for my teas of the day, I happened upon the 50’s Pu Tian Gong Qing Liu Bao from Essence of Tea. It was one I had ordered a small quantity to accompany the purchase of the book noted in its product description, Lao Liu Bao Tu (Pictures Of Old Liu Bao Tea).

(I emailed David asking if there was anyway possible for him to get a copy of the book for me before I had even ordered the tea. Happily he could, and now stocks the title on the site. It is a gorgeous book of photos and text. I urge anyone with even a passing interest in liu bao to grab a copy.)

I had one session with it previously; today, it was time to share the remainder with a friend.

My friend/co-worker/tea-pal TK and I have so far only drank together at work. And so, we tend toward the good to great cooked pu, and oolongs of various stripes. Every now and then, we take in the odd new cake or a less complex aged puerh, but rarely at-home quiet-time teas. I guess it was time to break our unspoken rule.

He, somehow, caught sight of the bag before I could surprise him with it. He was notably excited as he anticipated the first cup to land on his desk. (TK seems to have a sixth sense for these things, as he spied the 70s Jiang Chen from across the room when I brought it in the first time.) 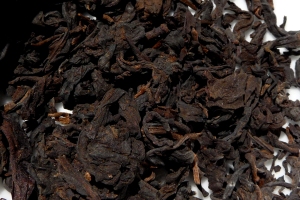 As I poured the first steep, and a golden halo edged the broth, it was clear that I had made a good decision.

Possessed of all the lovely medicinal and earthy tones looked for in a good liu bao, it carries with it an added heaviness and tone which is assuredly a product of its age. The broth was abundantly thick in the mouth from the first sip. TK suggested it was gelatinous in feel; I couldn’t have agreed with him more.

We paced the tea out to absorb its energy slowly, as I recalled that it sets deeply into the body –my first exchange with this liu bao left me barely functional for an hour or so after the last cup.

Between the two of us –starting in the morning– we steeped the leaves for all they had in them.

TK came over with a tea-crazed sort of look –which I assuredly was also sporting– following a series of morning and then post-lunch steeps, asking if he could take it for another. I had to tell him that I hadn’t even gotten to it yet following my lunch.

I had then accidentally left the leaves steeping for an hour or so while on an errand. Upon return, I assumed the broth would be undrinkable. What I hadn’t expected was one of the most heavy and sweet broths of my portion of the session.

I brought the filled pot into TK for its last steep, and left it on his desk. It’s always sad to see the good old ones come to an end, and that was its last sigh.

It mattered little as the mouth was left feeling saturated with oils and essences which lingered ad infinitum. I carried traces of its heavy, nutty sweetness on the tongue hours after my last steep. As I type, I swear it still lingers along the soft palate. Perhaps, this is a trick of the mind.

This type of tea isn’t exactly taken for its endless complexity; which is frankly fine by me. What is important is its aged qi and the elegant sweetness that haunt the mind and body. Yeah, I know, that reads like a load of waffle, but it is what it is, and this liu bao is assuredly rather special.

Taken with a dear friend only elevates it that much higher. 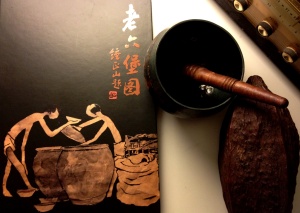 As I turned another year just the other day, I had decided a couple of weeks earlier that I would celebrate the day with a tea of similar… um, shall we say, vintage. I suppose this may sound silly, but it seemed a good idea.

Following some lengthy consideration I decided upon a sheng pu, the 1970 Jiang Chen from Bana. I wanted to try something unfamiliar, and chose a tea that had piqued my curiosity back some time. 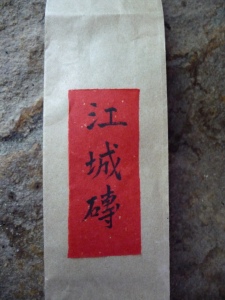 As you can see from the photo, the 20g arrived beautifully presented.

Upon opening the bag, the aroma of dry sugared rose buds muddled with earthy roots and faint talc filled the nose. The dry leaf chosen was a decent, and perfectly sized, sheered off chunk composed of flattened twisted leaves and odd scattered stems. 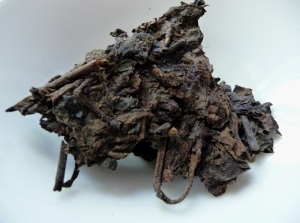 Once wet, the fragrance intensified to a mass of tangled roots winding in rich black earth. It all but buried the rose fragrance that had been previously noted.

The first proper steeping filled the mouth with soft notes of ginseng roots and damp earth. The rose while present in taste from the second steep, was more pronounced in the sinus cavity. The roots continued to flourish across successive steeps, becoming sweeter and increasingly tangling around the tongue. 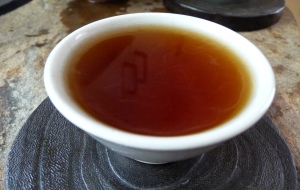 The throat feeling was full and warm, with a sporadic slight catching halfway.

This Jiang Chen possessed a rather penetrating qi. Within three steeps my body became profoundly warm, most notably at the abdomen which had become engulfed with heat. My palms became slicked with sweat. My body became calm. By the latter quarter of the session, I even noticed a heaviness set on my brow. 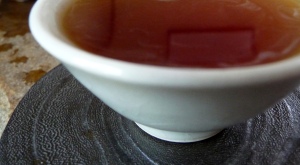 It proved a fantastic session with a tea that has since found me wanting for another exchange. 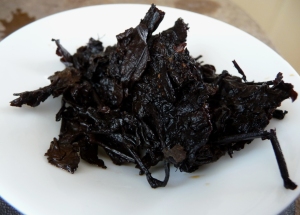